Hi I am Binx and I am new here. Nice to meet you.

catsmademedoit@gmail.com 2 months ago
The Cats Made Me Do It

catsmademedoit@gmail.com 2 months ago
Books The Cats Made Me Do It

Published and Pre Order Available Kindle and Other Stores

Cat Fence to Protect Our Cats!!!

The Story of a Little Black Wonder

One afternoon Mark, aka Daddy to us kids, got a call from the dad in this household asking if we might be willing to give Midnight a new home because they realized they knew nothing about raising a cat. Of course, Daddy said yes, so she made the trip down to her new house in Mt. Sherman, Ky. Midnight became the second Black Beauty as Crazy Cat Sanctuary. After Sister, Dorothy, got together with Midnight a few days later she tells Sister she is keeping the name to honor the boys who helped her get to her now FUR-EVER home. After a few months, she also told Sister, who, by the way, is a cat whisperer. That she has a new goal in life. She wants her Mom, Jo Ann, Sister, Dorothy, and Daddy Mark to help her rescue Black Cats and Kittens.

What’s Big? Huge? Gigantic? And Grey and White? And Purrs? When first seen by a neighbor as it moved through the woods it was seen through a spotting scope. He thought it was a Bob Cat. Then another neighbor saw him on her back porch looking up at her as if asking for food.

Help our cats Links also in side bar

To Space Or Not To Space 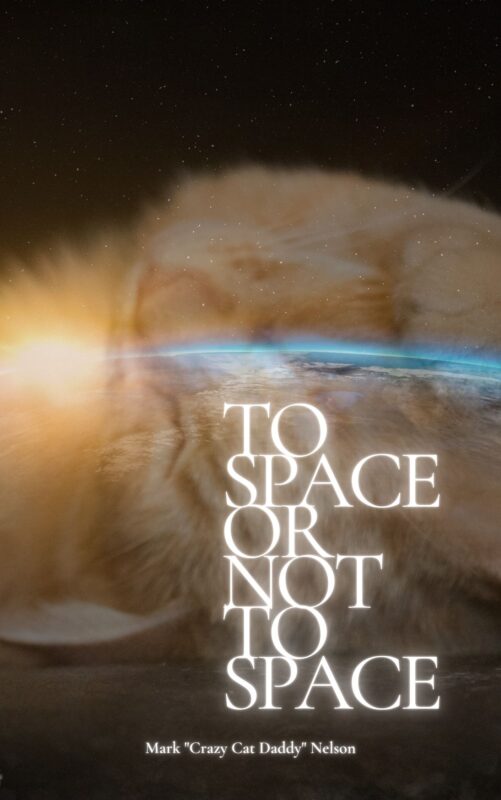 Cats in space?! Dogs from the Dog Star? It could happen. Welcome to Catdromida the home of "The Three Tuxedos". It's both a galaxy of twelve planets and a world consisting of three of those planets in an equal plain orbit, less than a day's travel between each of the three. The question one must ask is what could go wrong in a world run by cats. After all, cats claim they could run our world better than we do.
Shakespeare once said, "To be or not to be...". Now we look up from our little planet and say "To Space or Not To Space", that is the question. What's out there and what will happen when we find it. Strap in as we head out to Catdromida and see what's happening in the council chambers as "The Three Tuxedos" meet with a team from the Cat Treats factory.
Mark "Crazy Cat Daddy" Nelson and Tiger Tye

The Cats Made Me Do It!!! Book 4
Phase:Writing
100%
Get Book Updates
MyBookProgress by Author Media

Processing…
Success! You're on the list.
Whoops! There was an error and we couldn't process your subscription. Please reload the page and try again.
Follow us on Social Media
twitterfacebookinstagramtiktok